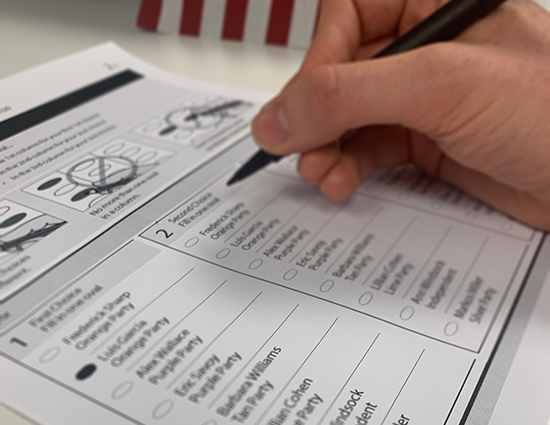 Ranked choice voting or RCV is gaining popularity across the nation. From Maine to Utah, states are exploring an innovative and logical way to elect officials who will best serve constituents -- and now, Virginia is getting in on the action.

During the 2020 legislative session, Virginia made history by passing two ranked choice voting bills -- a major step in offering Virginians access to a more effective form of voting.

It’s no wonder that ranked choice voting is gaining attention -- the benefits are clear, nonpartisan, and easily attainable.

When ranked choice voting is implemented, it guarantees a majority winner, meaning that constituents feel represented by their elected officials. Ranked choice voting also increases competitiveness of all candidates by allowing voters to vote their preference without fear of “spoiling” the election or vote splitting. This ultimately will create a less polarized political climate -- a step necessary to a better functioning democracy. And finally, the need to be an appealing “second choice vote” encourages much needed civility and broad coalition building on the campaign trail.

All are wins for our political system.

HB1103, an opt-in statewide local pilot is a first step to exploring what RCV could look like in Virginia. Beginning July 1, 2021, if a majority of a local governing body votes in favor of opting-in to this pilot, that body will then have its members elected by ranked choice voting.

When looking back at local supervisor elections for 2019, it is apparent that ranked choice may be a logical improvement for many jurisdictions. In races with more than two candidates, approximately 60% of the winners did not receive a majority. For example, in Mathews County, an at-large election with six candidates ended with the winner receiving only 21.5% of the vote. RCV should increase competition too, reducing the over 50% of uncontested supervisor races from 2019.

The great news is that ranked choice voting can reverse this pattern. By empowering local governing bodies to pilot this method of voting, the result will be increased competition, improved representation, and higher satisfaction amongst the electorate.

In a time when voters will be casting votes largely by absentee ballots, ranked choice voting is also insurance for uncertainty. In Virginia, voters are now given a 45-day window to vote early, either by mail or in person. In that span of time, so much can change. Candidates may drop out and votes may end up being wasted.

Just look at what happened with the 2020 Democratic primary races. On Super Tuesday alone, over one million votes across the country were wasted on candidates that had withdrawn within 24 hours of election day. Ranked choice voting would have ensured that those voters would still have their voices heard by allowing them to express second or third choices.

In 2021, RCV may be the option for Virginia’s localities and it’s voters.